Easily one of the most difficult levels in the beginning of the 150 column, twippted is a reference to level 88-1 twisted, by killisk. Both feature perpendicular jumps, though this level adds rockets and a gauss turret.

Generally speaking, the hardest part is the two switches at the top, so it is advisable to go after these first. Jump to the center, then leap twice up that slope (see green path) and with this added velocity press up and you will launch yourself high into the air up to the top section (this is called a perpendicular jump). It takes practice to achieve correctly, and is fairly difficult to pull off consistently. 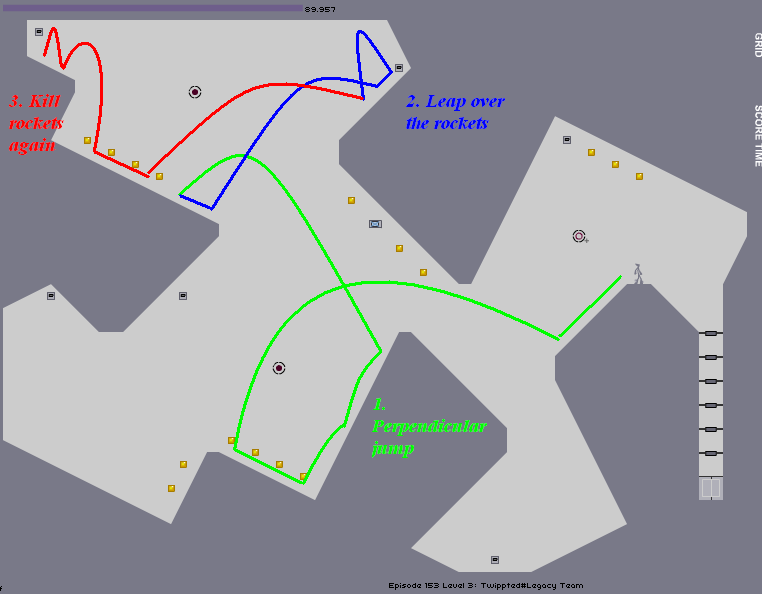 Skip this section unless you are having trouble with that perpendicular jump.

To perform a regular perpendicular jump, while heading up a slope, simultaneously let go of the left/right key and press the up key. Rather than jump forward, you will jump perpendicularly to the slope you are at, usually with more height added.

In this specific jump, you have to perform a jumping perpendicular jump, that is while climbing up a slope you jump and then as soon as you touch the slope again you just hit up. Depending upon how fast you’re going, that jump can send you sailing quite far. In this case, since the slope is steep and you will probably jump twice up, you should gather enough speed to hit the jump and reach the top.

To practice, go to Ned, just tile in a long slope, and practice the jumping perpendicular jump. Even after you get a hang of it, don’t be frustrated by not being able to achieve it often while playing the level. Remember that this indeed is quite a difficult level.

After you reach the top area, immediately jump to the right and hit that switch. As the two rockets approach you leap over them and let them crash into the ceiling. Jump to the left side, and do whatever it takes to kill off the rocket from the bottom rocket launcher (or to herd it with the first one). One strategy could be to run right underneath it as it comes towards you. Then leap onto the ledge with the left switch, jump over the rocket to kill it, hit the switch, and then exit the top area. Grab the exit switch on your descent, then head left. 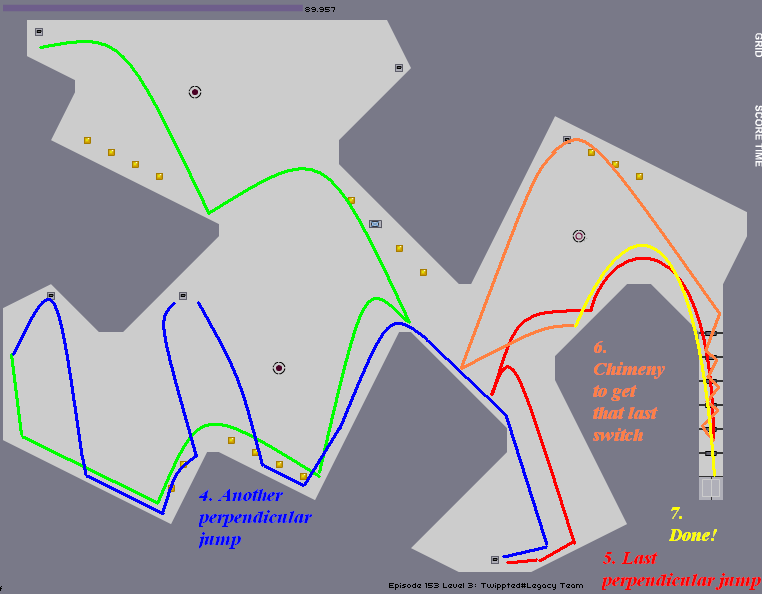 On the left are two easier switches. The leftmost one just requires walljumping. The one on the right could be gotten with a perpendicular jump (shown below), though there are other ways to jump towards it.

After that, head up the right side and into the right depression. Kill any rockets that managed to follow you, then grab the switch, and do the last (and easiest) perpendicular jump to get back up and out. Quickly jump over to the exit area before the gauss takes target. Go down the exit shaft, with one door still locked. When you reach the bottom, smash your (left) + (up) keys repeatedly (not too hard, but fast) to chimney upwards, and the angle of the ceiling will bounce you towards the final door switch. Quickly get to the exit.

Remember, this is a rather frustrating level. Time shouldn’t be of too much concern, as there is plenty of close-range gold to make up for it (in fact, you really just need two seconds at the beginning of the next level).

Community content is available under CC-BY-SA unless otherwise noted.
Advertisement