Run and jump to pick up some of the beginning gold, then fall down to the bottom level. A running leap will you get past the first row of thwumps. Collect the gold shaped as a coin at the bottom (walljump off a thwump to get the top gold). Then, starting at approximately the midway point between both rows of thwumps, run a tiny bit and then jump. You should just barely make it past all of the thwumps, landing at the switch area. Get the exit switch (the two door switches unfortunately unlock the drones at the top of the screen). As the thwumps are nearly done settling down, jump back out. The first drone at the bottom should be very close to the ground but still descending, so that when you jump, it won't immediately activate.

Repeat and perform another running jump to get past the first row of thwumps, then walljump up to the first level. The chaingun drones shouldn't bother you if you did the rest of the level fast enough. The laser drones will likely spot you and fire at you, though if you move fast enough they shouldn't be an issue either. 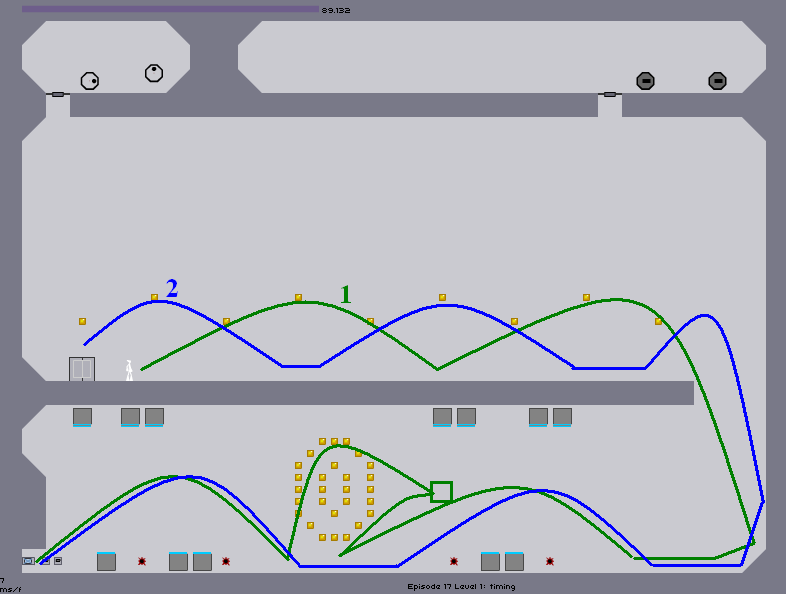 Retrieved from "https://n.fandom.com/wiki/17-1?oldid=8383"
Community content is available under CC-BY-SA unless otherwise noted.