Run to the left side and get the bit of gold at the bottom. Then emerge, and walljump up to that block. Lure the attention of the laser drone, then jump to collect as much gold as possible and fall down to hit the exit switch. Then run to the launchpad and hold to the right. Get to the switch as fast as possible, with a rocket and two gauss turrets pursuing you. At the top, walljump off the side at the corner against the ceiling, which will slam you into the ceiling and knock you back down to the slope with considerable speed. It should propel you over the rocket (if you don't move fast, the rocket will corner you), and then wallclimb up to the second switch. Get that switch and repeat the walljump maneuver, then quickly get to the exit. Be sure not to move too fast though, otherwise you will run perpendicularly into the bottom slope, and with enough speed you will end up killing yourself after all of that work. Slow down before dropping out of the middle region, and kill off the rocket if it follows you. Then enter the exit. 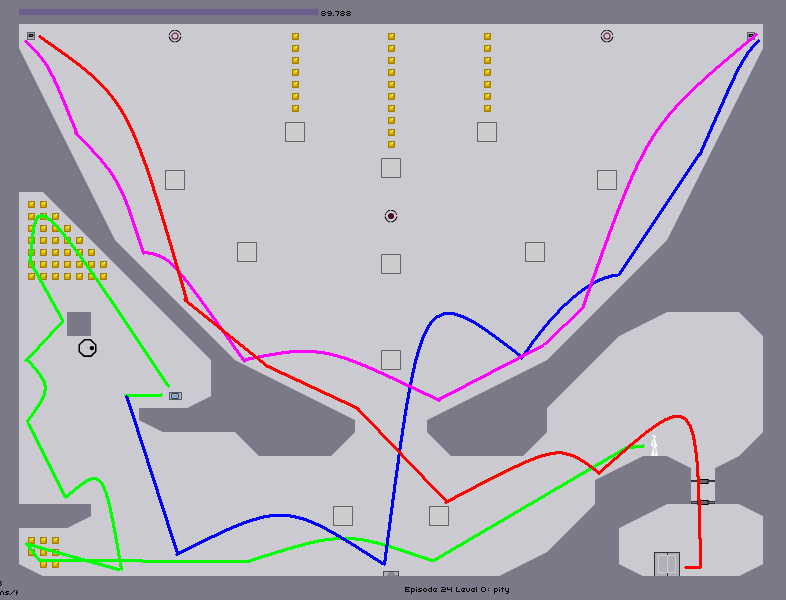 Retrieved from "https://n.fandom.com/wiki/24-0?oldid=8458"
Community content is available under CC-BY-SA unless otherwise noted.