You could jump to the left side via the circles, but a much easier way is to walljump up the right side. Jump up the wall twice, and then leap to the rightmost circle on the top row. This is more difficult than it sounds, however; you have to make your jumps such that you do not collide against the ceiling when you walljump off. At the same time, you need to go high enough to reach the top half of the circle. After that, get the exit switch, and evade the gauss turret's line of fire. Finally, jump across the circles to the bounceblocks, where you can jump to the exit. If you move fast, the laser drones won't be a problem. Even here though, don't drop your guard, as the gauss turret can still pick you off when you are right above the door. 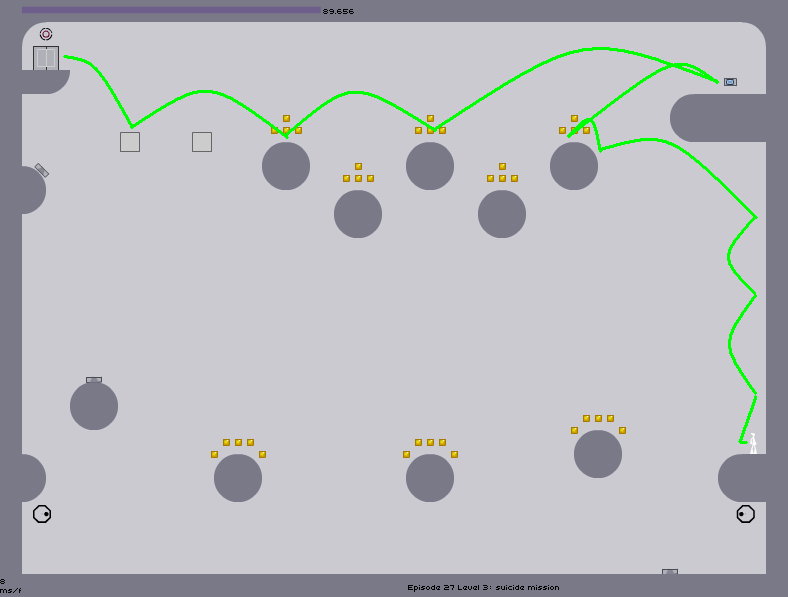 For the highscoring method, you will have to take the circles at the bottom, though with enough speed to dodge the left laser drone as it fires upward at the last circle. Then hit the launchpad, and make your way to the exit switch.

In fact, it's a bit faster to do a backwards bounceblock wall jump off the bounceblock all the way to the 4th circle, and then jump straight to the 2nd circle on the way back and from there to the other bounceblock and the exit. Watch 999_Springs's 0th demo or Raif's mbd. *shameless self-promotion*

Retrieved from "https://n.fandom.com/wiki/27-3?oldid=16674"
Community content is available under CC-BY-SA unless otherwise noted.