This is a level involving multiple zap drones and gauss turrets, and with not so much space to wallhug it may become slightly frustrating. It is likely better to come up with a spontaneous route due to the easiness to slip on some part, though the following is an example of a possible route you can take (along with some ideas that may be useful).

From the beginning, run to the left and jump on the launchpad. If you jump at the corner of the launchpad and simultaneously walljump off the wall, you will perform a "super jump" which should lead you right to the top of the map; jump off the wall and hang onto the tiles containing the top left switch. The zap drones should spot you and move harmlessly out of your way. Get back out of those tiles and jump to the top right carefully, grab that switch. Then go back to the center tiles and drop straight down, though be careful to wallhug at the end to prevent a death by falling. Go back to the launchpad and make a normal jump to the left switch. Run across the middle (the gauss turrets shouldn't be much of a problem) and then grab the switch on the right side, and then quickly drop down into the exit. 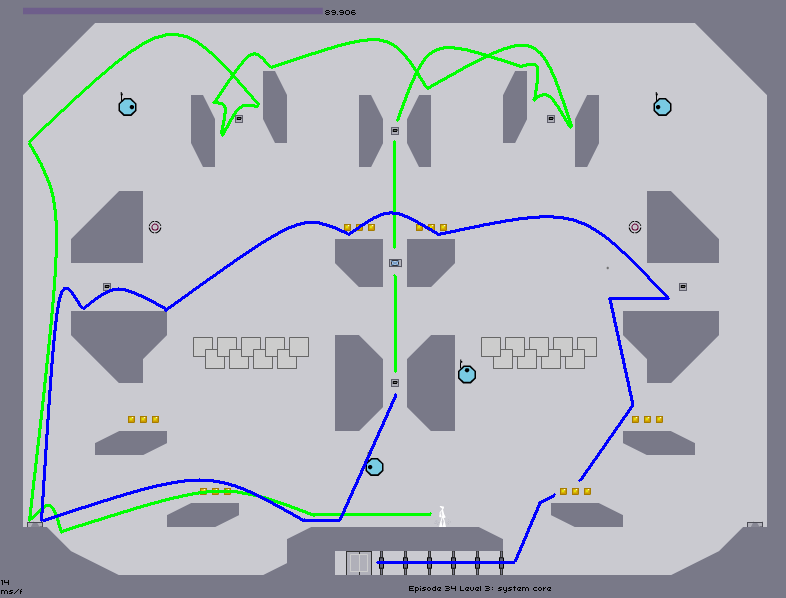 Add a photo to this gallery

Retrieved from "https://n.fandom.com/wiki/34-3?oldid=8269"
Community content is available under CC-BY-SA unless otherwise noted.