From the start this level appears to be quite frustrating, hence the name stress test. Climb up the triangles, and on the rightmost triangle (the bottom one), jump to the left in between the next two triangles. Slide down and jump to collect the exit switch, then get up to the top.

The picture shows a route to the top. Move quickly to avoid the lone gauss turret. The second part is extremely daunting, with 5 zap drones revolving around several small compartments. However, it is not very difficult with a couple of tries. Wait for the first drone to pass the diagonal entrance, then jump in and follow it on the outer perimeter (in other words, stay against the outside wall). Repeat for each of the drones, waiting for the drone to pass the diagonal area, then slowly sliding down the outside wall. 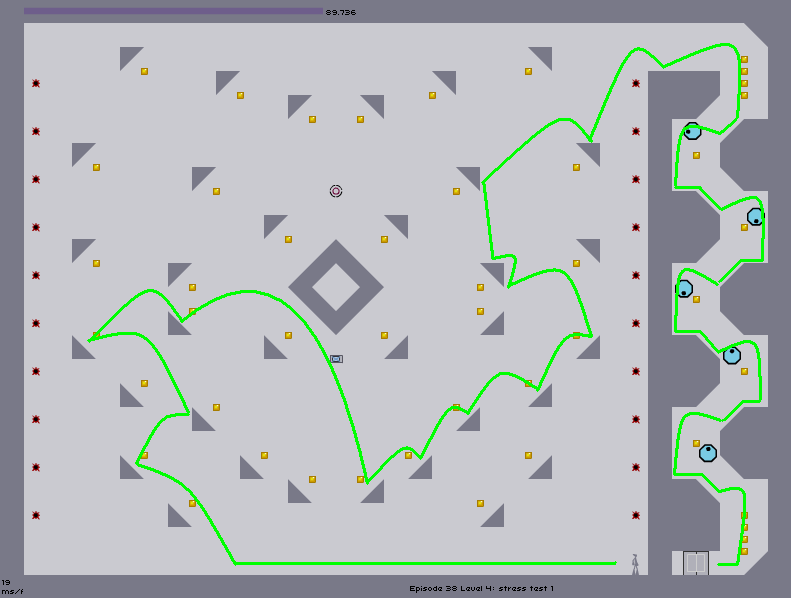 Same technique as above, however Highscorers can slip down the middle of the chute on the right - past a drone while staying on the inside - though this is a rather difficult maneuver considering the lack of space and speed necessary! Avidfanofn 01:19, 6 October 2008 (UTC)

Retrieved from "https://n.fandom.com/wiki/38-4?oldid=11383"
Community content is available under CC-BY-SA unless otherwise noted.