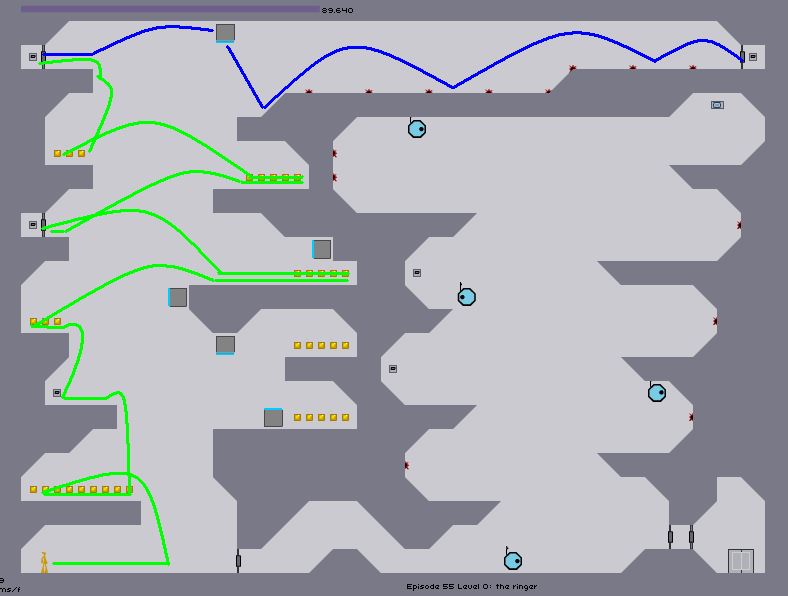 Jump to the ledge above you and collect the gold, then walljump of the right wall to get the switch. Jump to the ledge above the switch, and while the thwump is returning, jump over it and onto the ledge on the right. Get the gold below where the next thwump sets off, then go back left and get the second switch. The next part is tricky. If you are fast you could jump under the thwump that comes from the ceiling, get the gold, then return to the next ledge on the left. If you are skilful you could walljump off the block underneath the bottom of the thwump's path, in which case you would jump from the ledge where you just collected 5 gold. Once on the ledge with 3 gold, jump up, walljumping off the protrusion, up to the top switch. Next, jump along the ceiling so you hit the thwump there, and land safely on the next section. Jump through the mines to the switch and back. Drop down past the thwumps (keep to the left) and to the bottom. Go right through the newly-unblocked tunnel. The next part has quite unpredictable seeker zap drones, and the difficulty of it is a matter of luck. 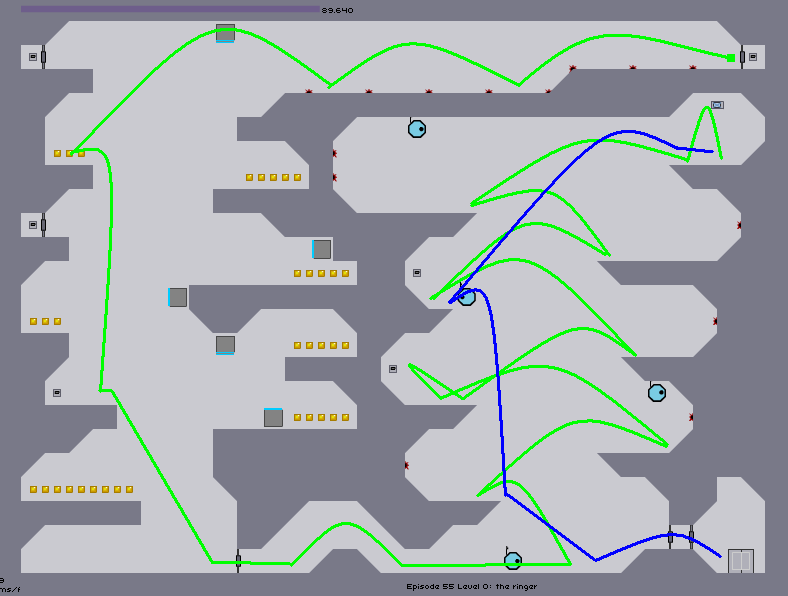 The best way is to simply be aggressive and get up as fast as possible. Vague, but true. Lure the drones at the top to the bottom, and then all you must do is jump left to right along the platforms, flicking the switches. The design of the sides makes it so that when that the zap drones will follow you very easily, but you should be able to put a good distance between yourself and the drones. However, you actually do want the drones to follow you; otherwise, you could get a drone stuck in the exit room (which is really annoying). Get the terminal, then get back down quickly to the exit.

in the drone section you can do a few things to make life easier on yourself. I thought this level was really hard the first time I did it, but it really isn't that bad once you realize that when the drones race after you, you control them. You can force them to go away from you or where you want. To start, you can try to lure some to the lower part of the level just to get them out of the way for a moment. That's fine, but don't focus on luring, focus on getting up the level and lure as you go. What you'll see as far as drone patterns go is that they will probably be going right and left in sort of a zigzag pattern downwards. If they are going upwards, then it should be easy to avoid them or lure them away. Anyways. If they are coming down, and you're going up, what's going to happen is they will be coming in a straight line towards you a little bit higher up than you as you are trying to jump from one side to the other. You can take care of them in one of two ways: the first is to jump over them, which can be done, but is harder, or you can just jump straight up and lure them towards you, then jump from one side to the other once they're far enough over. 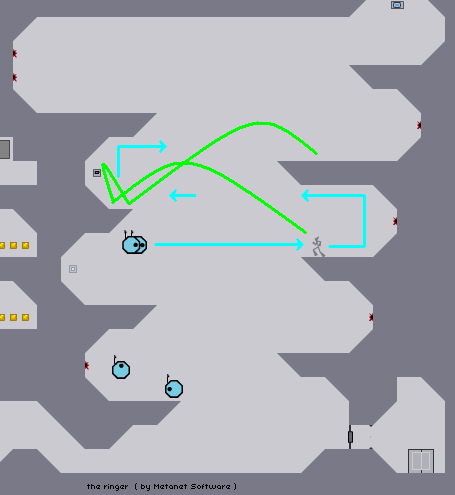 You should be able to do this pretty easily and work your way up towards the top. Once you near the top, try to lure a few drones up towards the top, because once you hit the last switch, the drones can get into the little room with the door, and that complicates things. So make your way down while the drones are zipping about, and if did your luring right (to the bottom at the beginning, to the top near the end) then the way to the exit shouldn't be too difficult.

When playing this level, I often found it helpful to wait in the little nooks on the right-hand section of level until the zap drones passed by and I deemed it safe to jump to the next nook. You're more or less safe in these nooks since they are covered from the top and bottom, and because the drones never really move vertically. Also, it may be helpful to get one of the switches on your way down so that the drones don't wander into the exit room.

Retrieved from "https://n.fandom.com/wiki/55-0?oldid=12448"
Community content is available under CC-BY-SA unless otherwise noted.