This level is just what the name says "enrage-o-tron." On the map, the Red is the approach and the Blue is getaway. The route I laid out gets all the gold, and gives the two shortcuts. Speed is important, but so is accurate jumping. 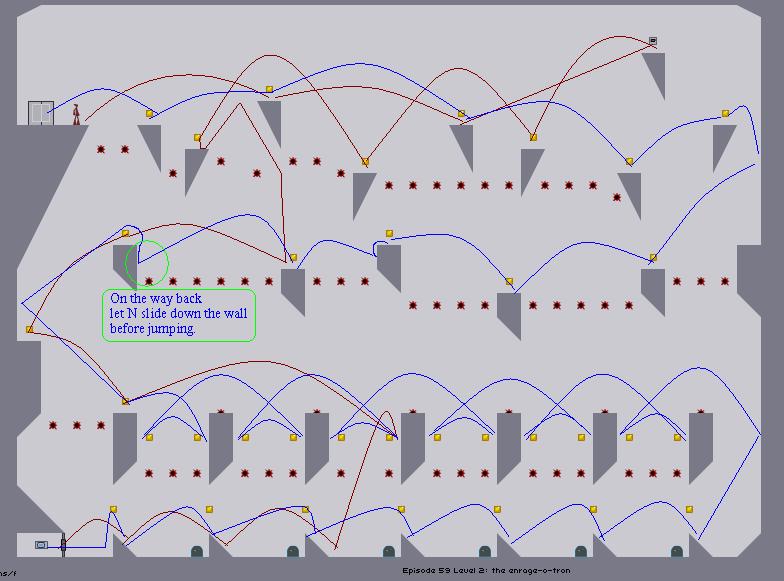 The top level is self-explanatory. To descend, the normal way would be to drop down the right side and proceed left, though you can take a shortcut shown on the image above. With the former direction, there are a couple of jumps where it might be easier if you lean over and hang onto the side before jumping off (otherwise you might hit the ceiling).

After getting the exit switch, carefully get yourself to the right side by jumping over the floorguards. Land on each of the slopes, slip down a bit, then jump again until you reach the side. Then walljump across the next section. Back at the second level, again use the trick to lean over on the side before walljumping to prevent yourself from hitting the ceiling, which will have lowered due to the side the pointy thing is on. From the second to the third platforms, jump to the side of the third platform to avoid touching the ceiling. From the third to the fourth, jump just slightly, otherwise you will touch the mine ceiling.

After getting out of this level, navigate through the top part. Be careful not to accidentally die - or you really will be enraged.

Retrieved from "https://n.fandom.com/wiki/59-2?oldid=9628"
Community content is available under CC-BY-SA unless otherwise noted.