Here we are, the final level of N 1.3. You just got past some of the toughest challenges Metanet could throw at you, in the form of everything else in Episode 59, but this is easily the hardest of them all.

This level takes the form of a "gauntlet": challenge after challenge. Each as deadly as the last, with some really difficult moves near the end for the lovely "dying next to the exit" factor. But it has to be done ^_^

Well, unless you have some exceptional skills, you'll be running really low on time now. You start with some (rather) easy-to-get Gold, so it's up to you whether you want the buffer or not. Generally, if you start with less than 60 seconds or so, it's a good idea to get the easy gold. Anyway, to tackle the first challenge of Thwumps A and B, follow the brown path and drop straight down the left wall. Thwump A should pass right above you, and you should land on Thwump B. It'll move towards the right, presenting you a drop, so hold right and jump off the wall and into the next portion.

The unavoidable switch doesn't help you in any way. In fact, it releases 3 Seeker Drones, and in tight quarters. Generally, move left as quickly as possible, and stop on the platform to get as many of the drones to follow you towards the right as possible. The key is to not let any drone move on into the next section, which will complicate things. Lure any seeker drones that has moved on to the next section back.

Now, step on the Launchpad, taking care to hit the RIGHT of the launchpad. As you go up, press RIGHT as well. If done correctly, you would trigger Thwump C without being crushed into Ninja-paste. Walljump onto the ledge, and quickly jump to trigger Thwump D in a similar manner before Thwump C returns and crushes you with the non-business end. Follow the path, avoiding the rather easy Zap Drone A, and move on to Drone B. In general, you don't want to get caught with the drone in that tight passageway, so the safe way out is to wait for the drone to get in the position shown on the map, and jump over it into yet another section. 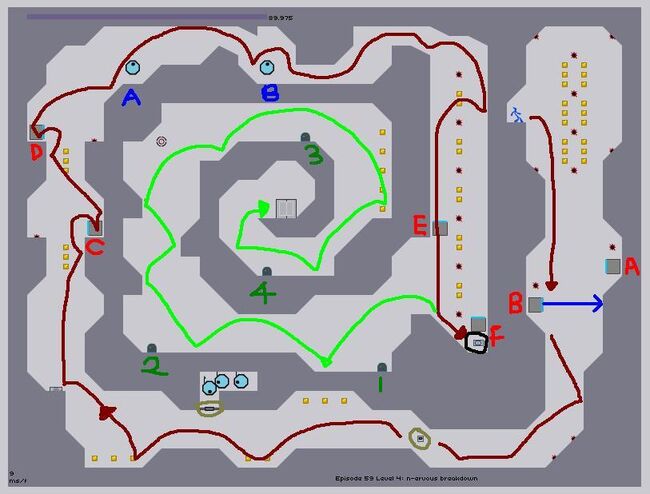 Here we have the final thwumps of the level, along with some mines and the doorswitch. Jump against the ceiling and towards the right wall, triggering both Thwumps. Jump UNDER the rising Thwump E, and fall towards the slope. The Ninja JUST fits under the bottom mine, so grab the switch, and quickly run back up the slope (don't jump against the mine, that's just stupid). Now, get ready for the most frustrating part of the level.

Follow the bright green path. As you land away from Floorguard 1, Floorguard 2 should be on its way towards you. Jump over it. Now for the grinder: The Gauss Turret. This little bitch is placed in the worst area possible. Jump against each of the portrusions, wasting no time at all (The Gauss Turret makes sure people who lag die a rather annoying death ). Basically, follow the path (easier said than done, though). If you made it to the top, well done. Use the slope to jump up, triggering and avoiding Floorguard 3, and into the final stretch. Jump off the wall towards the area with Floorguard 4, taking care to land FAR FAR from it (it's a really small area, and Floorguards are really fast. And trust me, dying here feels like shit), jump clear over it, and to the exit.

Community content is available under CC-BY-SA unless otherwise noted.