For most people, the mines (bottom right corner) is the hardest part, so in interest of saving time it is best to start with it first. Jumping amongst the mines is fairly self-explanatory, though much harder to execute. At the very left side after hitting the switch, jump to the left wall, then walljump to the right side and back to the left again.

The floorguard part is often considered the next hardest part, especially since you also have to avoid the gauss turret at the same time. Wall jump up the right pipe, and then jump over to the left side. Here, dodge the gauss turret to jump up to the top switch. The other switch can be obtained by wallsliding down the pipe wall, leaping over the floorguard, and repeating to get out.

The zap drone part is one of the easiest; simply wait for the drones such that one is right underneath you, and then fall straight down. Get the switch, and then walljump back out.

The last part is the thwump section. Trigger them, and then jump over to the switch. Then walk on top of the thwump back to the main area. Also, hit the terminal. 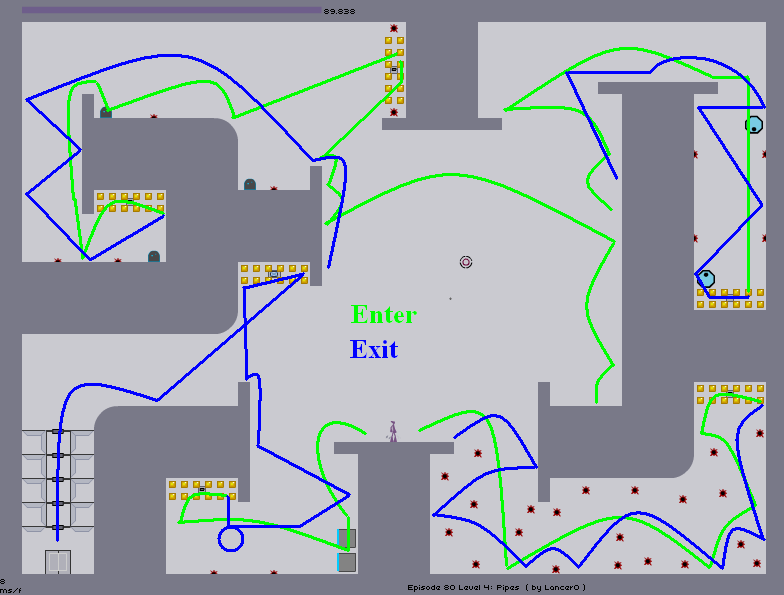 Now we're talking. This one's harder, and definitely will take some tries to get it done. From the start, jump and head down to the mine section. It's one of the two hard sections of this map, and doing the hard part first eases tension later. Once you land, jump over the mines and land in the open space, then jump and walljump up and flip the switch, getting the gold while you're at it. Go back to the open space, then jump and jump again, and wallclimb up to the area to the right of the start. Wallclimb up the pipe to the northeast section, then time your descent and wallslide down, then drop down to the switch. Get the gold, then ascend out, avoiding the drones. Drop down and wallslide back to the area to the right.

This is one of my all-time favorite levels, I think the map is well made and it shows. The key to this level is simple: you better have skill, and don't screw up. Seriously, this is a tough level to beat consistently, so keep trying, because you get better at doing each individual piece of the level the more you do it. Which brings me to how I'm going to attack this level. There are six groups of gold with a switch in it, and it doesn't really matter in what order you do them in, they may as well be separate mini-levels that you have to do consecutively. I'm going to list each seperately in the order I think is easiest in overall terms (get the tough stuff out of the way first is best in my opinion).

First section: The mines in the lower right. Really, all this section is about is navigating the mines and jumping precisely. Pure skill once you know the way. My suggested route to get back up and out of this part sends you back to where you started, but you can do it the other way, you're just a bigger gauss target.

Second section: The drones and mines. Well the drones follow a set pattern, so just drop in between them, or when one of them is in the lower right corner, drop to where he is (he'll move and you'll be set to grab the switch and wall jump out of there easily). Shouldn't be too bad if you see what's going on and realize the spacing of the mines is not bad at all.

Fourth Section: The switch with a floorguard under it. Be cognizant of the floor guards on the way here. Remember this is the final level of the episode, so time is not an issue. This part itself is really not too bad of a reflex thing, just drop in the middle and jump right away and you can do it, or you can lure the floorguard to the side to buy yourself more time. Grab the switch, and don't step on the floorguard or mines. Just jump as soon as you hit the ground and you'll be fine.

Fifth Section: The switch guarded by thwumps. The easy way to do this part is to drop from the lip by where you started and fall hard right, so you land on top of the thwumps. They'll move out of the way, then jump over them to the middle over top of them as they come back. As soon as they both trigger a second time, jump and get the switch. Then just jump out before the trigger a third time, which shouldn't be too hard, and you'll be fine. You can do this part faster, like having the thwumps trigger only once or twice (you can land on top of them and walk on top of them back out if you're good, like in my highscore). I'm just giving you the way that requires the least precision.

Sixth section: The terminal switch. Get up to the lip of the pipe that is below this part, jump up to the wall, wall jump to the switch, and waltz to the door. Just don't get killed by the gauss turret.

That should cover that long, fun level. Again, I'm telling you this level requires a good amount of skill, and the ability to not screw things up (10 perfect precision jumps don't matter if you screw the 11th one up). This was the level that kept me from getting through the 80's column until I had finished most of the other columns. 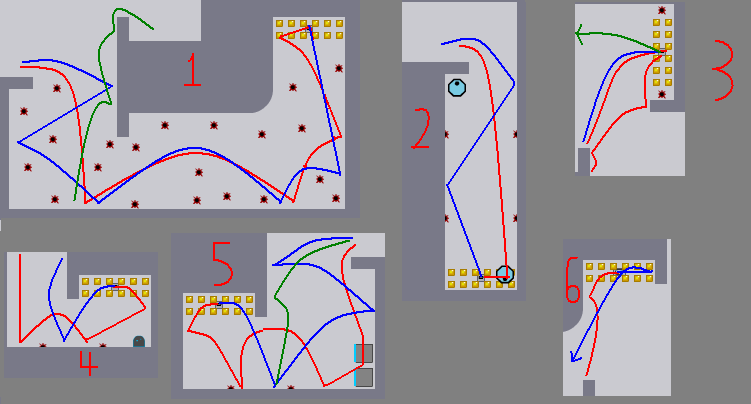 Retrieved from "https://n.fandom.com/wiki/80-4?oldid=10269"
Community content is available under CC-BY-SA unless otherwise noted.