Twisted, a somewhat difficult level by Killisk, is a level released in the eighth episode of the user column. The entire level revolves around a trick known as the Perpendicular Leap. As of September 6th, 2005, Twisted is rated 4 ninjas on NUMA.

This level requires the perpedicular jump, which should be practiced for quite a bit before actually doing the level. From the beginning, you will sent at a high speed at a slope; when you hit it, hold up and then right and you should've just perpendicularly leaped into the next area. On the second slope, release the right key after going a bit onto the slope while simultaneously pressing jump, which will send you high enough to the next area.

Continue these perpendicular jumps to reach the bottom area, get the terminal, and then perpendicular jump out of the terminal room again. To get up on the right, use a technique similar to 85-0: wallhang on until at the bottom of each ledge before carefully jumping up to the next ledge. The remaining parts of the levels require much simpler perpendicular jumping, though be careful not to miss the exit room when returning to the area that the locked doors were. 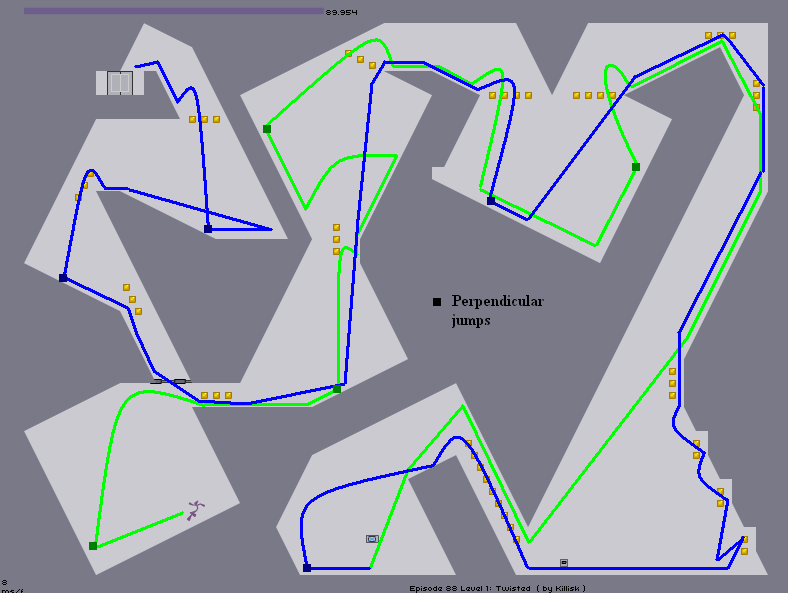 Retrieved from "https://n.fandom.com/wiki/88-1?oldid=10417"
Community content is available under CC-BY-SA unless otherwise noted.