Mother Thumping Impossible (also known as MTI) is a map created by blue_tetris. It was included in N 1.4 as level 88-4 and is widely considered the most difficult (and infamous) level of the game. It is often mistakenly called Mother Thwumping Impossible due to the large number of thwumps. 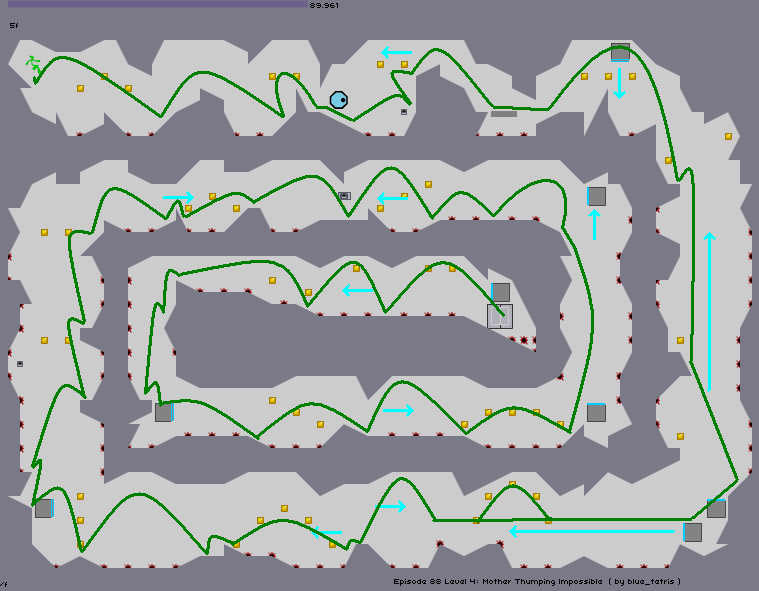 Each tunnel is discussed (in order) in a paragraph. You should only use this if you are a complete and utter n00b.

As soon as you start, jump and hover right to collect the three pieces of gold and land on the slope past the two mines on the bottom. Jump again past the next two mines, and then jump to hit the trapdoor. Wait for the zap drone to pass by overhead to the left, and then climb into the next area where the trapdoor was sprung. Run across to the right, and jump on that slight slope. As you approach the thwump it will move downwards, giving you room to squeeze above it and enter the first vertical tunnel.

In this tunnel, on the left wall there are three protruding ledges. The goal is to land on the third one from the top, which will slow your momentum and let you slide down to the bottom right slope. If you're impatient you can immediately fall down to that slope from the previous tunnel (the extra speed might cause you to crash into a mine, however). Otherwise, stop on the first ledge, then tip over to the third ledge, then fall onto the bottom right slope and land on that thwump. Immediately hold left! 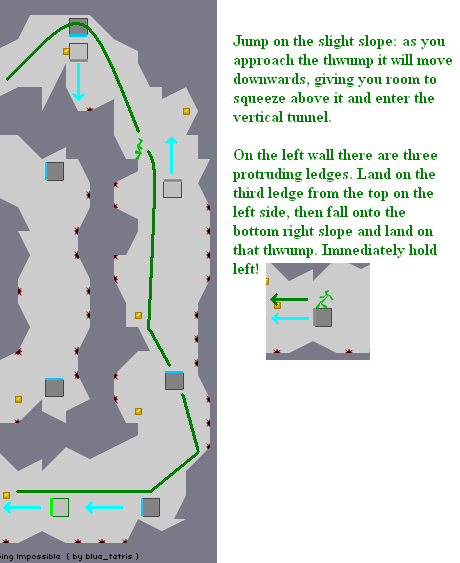 In the third tunnel, you will perform a trick in which you can ride a thwump. If you hold left, you will be running on top of the thwump (actually, you will go slightly faster than the thwump, though this shouldn't be a problem). You can choose to jump to get the arc of gold in the first cavern. In the second cavern, immediately jump upon entrance, leaping over the rightwards moving thwump, and landing on that ledge on the bottom. Tilt over to the side, and then leap off of the slope, collecting gold on the way. From there jump to the end of this tunnel.

Now you will have to climb upwards. Jump onto that little downwards slope under the bottom left ledge, and from that position carefully jump onto the little ledge above. (Its not as difficult as it looks, despite the mines). From here, you can choose to get the trapdoor or not. Getting the trapdoor greatly increases your chance of dying here but it helps slightly later on; I personally find it easier to avoid getting the trapdoor. To get the trapdoor switch, walljump off the bottom right ledge of that shaft. Otherwise, land on that ledge, then jump up the next two ledges and activate the thwump there.

There's many ways to do this next tunnel, and patience helps. At this point, I recommend pausing the game (its probably getting a bit nerve-racking by now), and uponing up Eeyore's level data program and opening 88-4 on Ned. [Enter] yourself onto this tunnel and practice it a number of times, because its frustrating to have to do the entire beginning and then dying close to the very end. Actually, what is so frustrating about this level is that it gets harder towards the end, so don't get angered if you're having difficulties with the last parts. Many players take up hours to beat this level for the first time.

Going back to this tunnel, stay on that little slope you start at and just wait there for the thwump to come by.

Leap slightly over the edge to activate the thwump at the bottom.

Congratulations on beating (at least what is considered to be) the hardest level of the game, and unlocking episode 89!

Retrieved from "https://n.fandom.com/wiki/88-4?oldid=20389"
Community content is available under CC-BY-SA unless otherwise noted.