Race maps are designed so that the various aspects of the map keep the ninja moving quickly and have some degree of flow. They will often have areas where the ninja can run or jump for an extended period of time to build up speed and while rarely require sharp turns or altogether stopping. For example, there may be enemies to keep a player on his/her toes while moving. Or, there may be a thrilling course in which a player aims for the fastest time.

Destiny once said the following on how to make a race:

I have noticed that my races are rather popular, and since incluye asked for some advice on races, heres mine:

1. Be inspired, play some high-quality races from the experts before you start, get yourself in the mood. Don't be afraid to borrow flow from these guys - just make sure it's not obvious (Try putting it at a different location in the map).

2. Sketch out the flow of the map. Try to make an innovative, and creative route for your race. Try not to include loops if it's possible. Make sure your flow fits the theme you want to establish.

3. As you continue working on your flow and route, you should make the tileset attractive simultaneously. Each time you start a new section of tiles you should try and make that section look appealing, and most importantly, consistant with the theme of your map. Some mappers choose not to bother with their tileset and aesthetics until their route is finished; this is possible, but generally not advised. If you find this method works better for you, stick by it. No two mappers are the same, after all.

4. Add some enemies. Try to create as many close calls as possible without the enemies becoming unreliable. If they kill you from time to time, you should generally remove them. Don't worry about cramming in every type of enemy there is into each race. The most important thing to consider when placing enemies is the maps' theme. For example, drones and floorguards work much better in futuristic, space-age atmospheres than a chaingun or rocket would.

5. Some authors like to make their races uncheatable by including locked doors and one-way doors to keep the player on the correct path. My advice is that if you can do it, without reducing the maps' aesthetic appeal, go for it. If you can't, then it's no big deal. The race will still work, and people will still play it as you intended. The only difference is the speedrunning route, which can often be fun to compete on too. It's a win-win, really.

6. Finally add some gold - but don't just scatter it everywhere, decide on a good-looking pattern or theme, and place it in seperate places around the map. Make sure you don't place too much, or your map will look messy when you're done.

7. B3njamin: If you're making a no-jump race, do not spam launchpaths. That's more of a (flow) beauty flaw then a mistake. No-jump races are suposed to be very inovative, jumpaths however, are not...

Shazam! You got yourself a race. Remember to try and be innovative with your races. People always love to see a flair of originality in this genre. 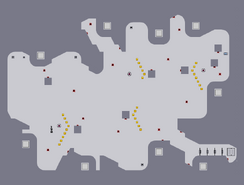 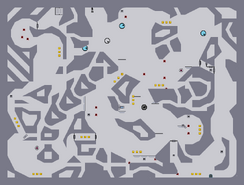 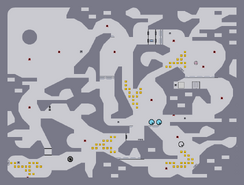 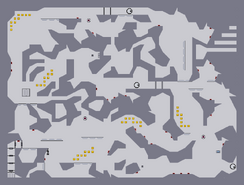 Add a photo to this gallery

A basic race is a (sometimes) good-natured flowy map where the ninja must follow a [sometimes] hidden path in order to complete the level. With the right flow, you can create something spectacular.

A tunnel race is where the ninja has to find it's way through a race through, as the name suggests, tunnels. Some require you to execute squeezes.

Drone races are a different kind of race. It's not the kind of map that has the most flow, usually. It may not be a map that is very simple, or even complex for that matter. Drone races usually go like this: it's a race in which you have to beat drones to a certain point or else you cannot complete the level. ~ The Race Manifesto

Thwump races are similar to drone races. They can have traditional race flow elements such as the great thwump race by ska or can simply be a gameplay device to force the player to be hasty such as I'll keep him busy..., also by ska.

A KRA (Keep the Rocket Alive) race is where you have to prevent the rocket from be destroyed or else you will not finish the race.

As the name suggests, you cannot jump or else you will not be able to complete the level.

Example of a no jump race

One of the least popular forms of a race, the ninja can only jump or else you will not complete the level.

Guide for a decent race map by B3njamin and Riobe

Retrieved from "https://n.fandom.com/wiki/Race?oldid=19413"
Community content is available under CC-BY-SA unless otherwise noted.